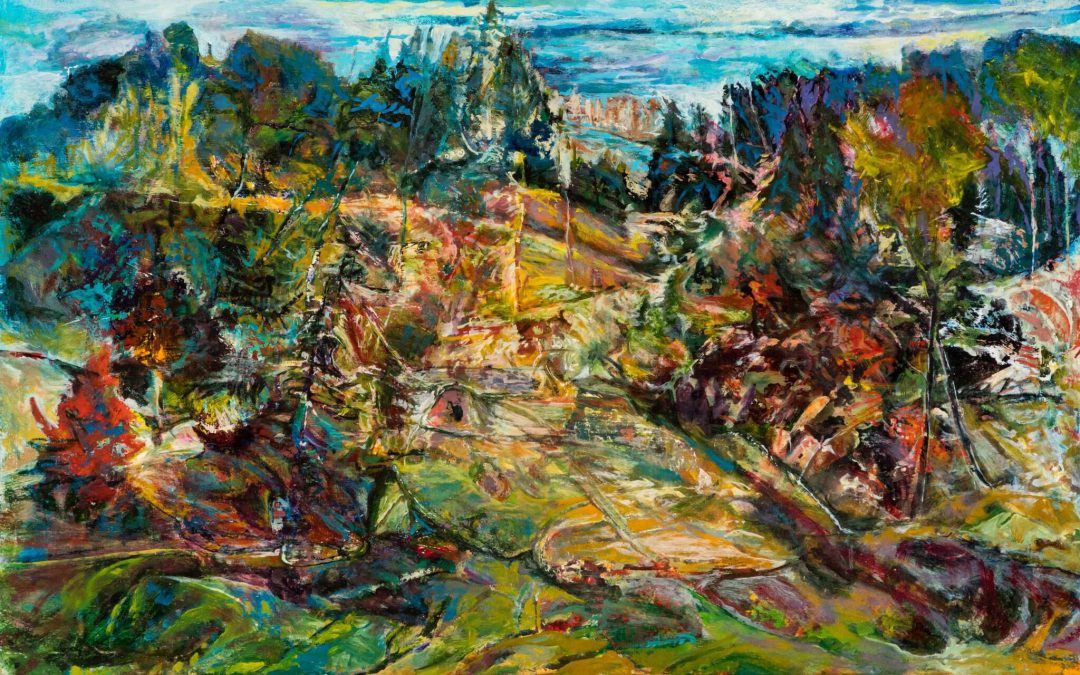 Winnipeg painter Patrick Treacy has given the humble palette its due.

A palette is a board or plate where artists usually store the paint they wish to work with that day, where two or three colours of paint are often mixed together to create different hues or tints.

Once the work is finished, the palette is marked with countless colours and shades of paint. If the artist uses oil or acrylic paint, the palette is usually scraped off or sometimes then cleaned with thinner or rubbing alcohol; watercolours are simply washed away.

That’s not how the 71-year-old Treacy works. In his latest exhibition of landscapes, Bushland Series, which opens at Cre8ery gallery Thursday and is on display until April 12, the painting is the palette.

The tool he would use for a previous painting has become its own painting.

“When they’re dry, I go back to them and scrape them. I was ignoring that for a while.”

He builds wooden edges around his palettes, like baseboards, to keep the paint from dripping off and making a mess in his West End studio. When he looked back later, he discovered the random results had become something special. 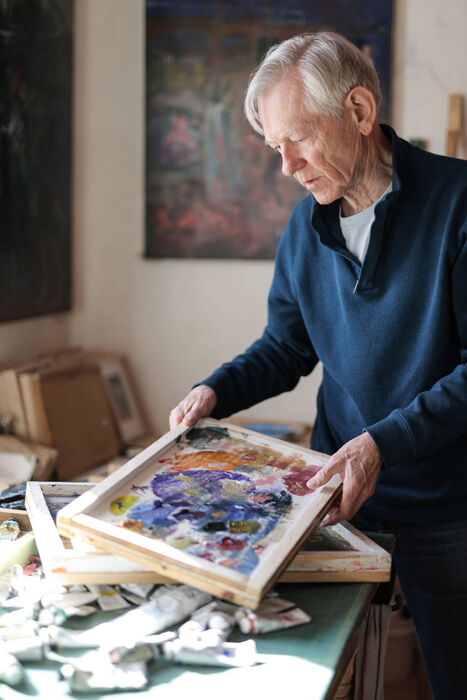 Patrick Treacy usually scrapes down the palettes he used during painting sessions and reuses them. (Leif Norman)

“When I cut that border off, it was a beautiful object, the scraping was too beautiful to ignore,” he says.

Treacy added some final touches of paint to the scraped palettes to transform the kitchen cutting-board-sized pieces into woodland memories of Manitoba’s boreal forest from his childhood.

He grew up in Anishinaabeg communities such as Little Grand Rapids, following his father who ran Hudson’s Bay Company stores in Manitoba and northern Ontario.

He remembers venturing into the woods near Fishing Lake, about 280 kilometres northeast of Winnipeg, a part of the boreal forest called Pimachiowin Aki, which was named a UNESCO Heritage Site in 2018.

“I always privileged that landscape as perfect, and eternal and forever, and that’s how it existed in my mind,” he says. “The boreal forest is my muse but I’m also learning about the boreal forest and it’s in danger. 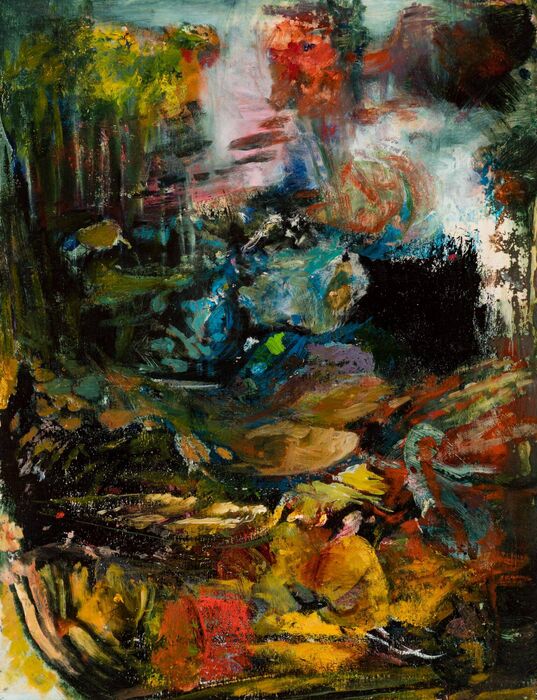 In Bushland Series, the palettes are the paintings.

While he treasures that protected land, his views of it are not the neat and orderly depictions of nature that many landscape artists have made.

He says a friend called his works organic anarchy, where trees come in all shapes and sizes, branches go every which way and vegetation in summer is in full bloom or autumn decay, creating vivid Expressionist scenes.

In Bushland Series, he immerses you into the forest he remembers, as if you were dropped in the middle of it by parachute.

“The landscape lends itself to this. It’s chaos and disorder,” he says. “If you’re Cezanne, you really organize it. If you’re Van Gogh, you go wild with it.”

Treacy’s gone wild with his palette-scraping experiment, and after hanging about 25 of them on Wednesday for the show, he’s wondering what to do next.

“I’m very tempted to start pulling the palettes out of circulation and work with them, but I’m running out of palettes,” he says with a chuckle.

Bushland Series is Treacy’s second exhibition at Cre8ery since 2020, when he was able to unveil Magpie Beauty in between pandemic shutdowns.

That show didn’t get an official opening, and neither does Bushland Series, but Treacy and his show are part of First Fridays at the Exchange on Friday evening. 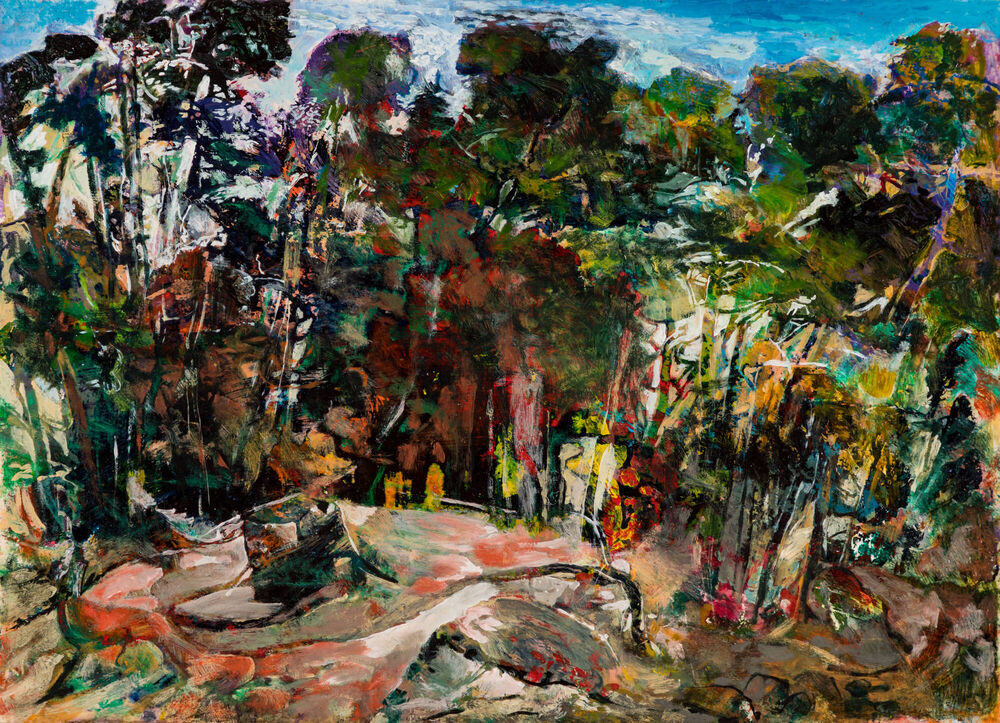 Turning the scraped palettes into the base for visual memories of the boreal forest was a short leap for Patrick Treacy.

He’s confident about his woodland paintings, but less so about COVID-19’s status in Manitoba in the spring of 2022, where he says people are left to fend for themselves.

Treacy is a cancer survivor and underwent surgery just prior to the pandemic’s arrival in Manitoba two years ago.

He’s been living a monastic lifestyle in an attempt to keep the virus away from his weakened immune system, which has allowed him to focus more on his painting, and his scraping of old palettes.

“That show came after a stay in hospital,” he says of 2020’s Magpie Beauty. “Now, I pray that I don’t fall into the hands of any hospital. It’s just a nightmare.”